Whether you love your Zoom classes or loathe them, we need to touch upon the elephant in the room: at least 463 million students are cut off from online learning worldwide.

Students of all ages are unable to reach remote learning platforms because they lack the devices and infrastructure needed to implement them. 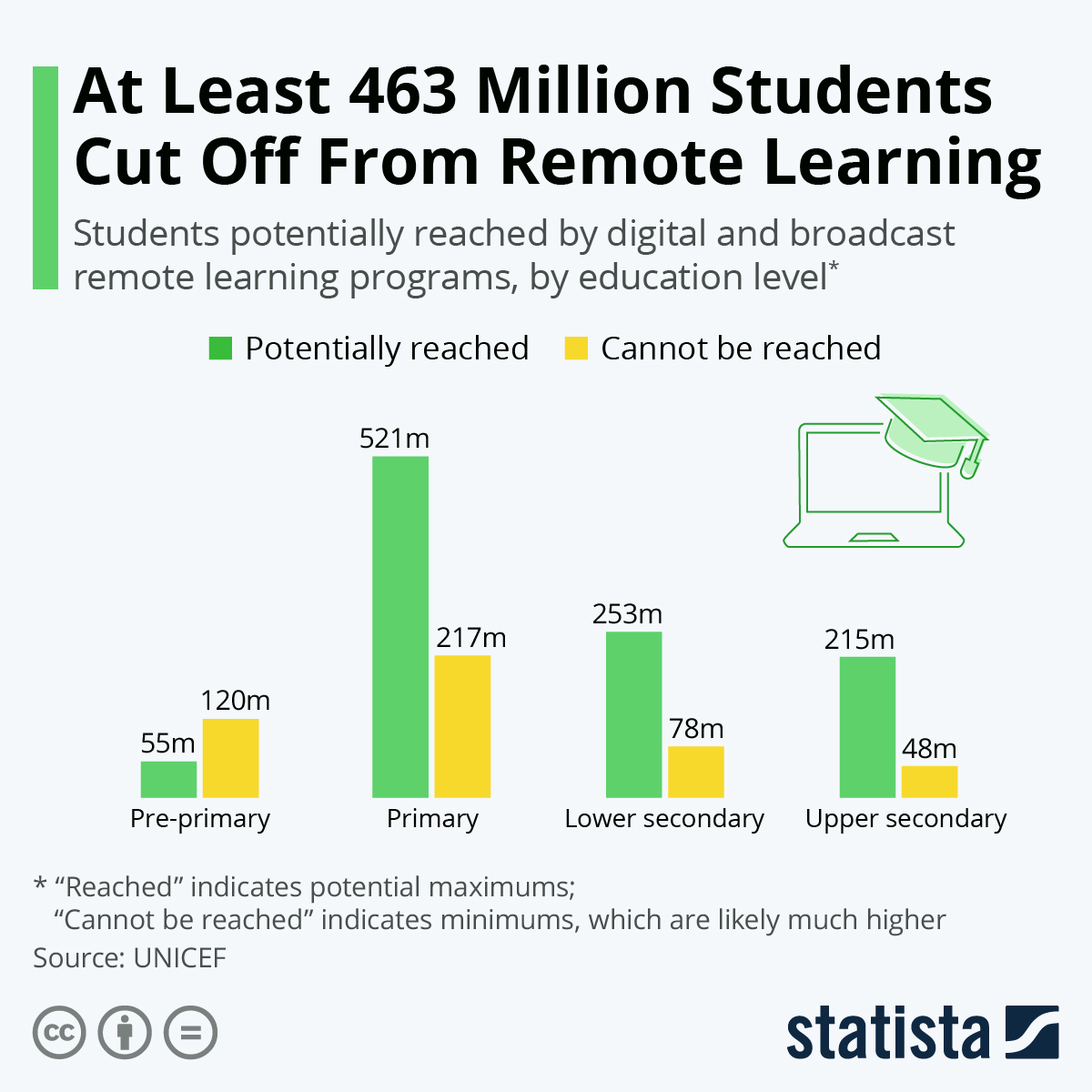 Primary students — those in grades K-6 (a.k.a. elementary school here in the States) — are hit the hardest, with at least 217 million children unable to access education amidst the pandemic.

“Students in rural areas consistently represent the vast majority of those who cannot be reached by any of the three remote learning modalities analyzed, irrespective of the country’s level of economic development,” the UNICEF report states. “Overall, three out of four students who cannot be reached live in rural areas, but in lower-income countries the percentage is even higher.”

Students facing the most economic-hardship in lower-income countries represent 47 percent of those who can’t be reached.

The countries with the least access to remote learning for their students — either due to a lack of technology or lack of policies supporting virtual — include:

As we’ve seen with the tribulations schools reopening over the last few weeks, the answer doesn’t lie in sending all these children back to brick and mortar education. It’s just not practical during a global pandemic.

Instead, we need to find other ways to make sure no child gets left behind.

The UNICEF report describes how many countries have adopted educational television and radio broadcasts to supplement for online classes.

This helps increase the reach of remote learning, but it isn’t enough. Many of these students don’t have televisions or radios to receive the broadcasts.

Solving the problem starts with raising awareness. While students here are hemming and ho-ing (for good reason) over school closures (which are remaining closed for a good reason, too), we need to shed light on how many students don’t have the privilege of attending Zoom classes from their computers and taking notes on their iPads.

Policy changes need to occur as well, but these take time. And not every country has a First Amendment right or democratic society.

In the here and now, we need to pull together resources:

If you know of any organizations involved in these activities or have other solutions to the education accessibility crisis afflicting children around the world right now, contact us.

For all other inquiries, please fulfill a contact form.

A cynical optimist and mad scientist undercover, burgundy bug is the editor, graphic designer, webmaster, social media manager, and primary photographer for The Burgundy Zine. Entangled in a web of curiosity, burgundy bug’s work embodies a wide variety of topics including: neuroscience, psychology, ecology, biology, cannabis, reviews, fashion, entertainment, and politics. You can learn more about working with burgundy bug by visiting her portfolio website: burgundybug.com

View more posts from this author

The Burgundy Zine is a digital magazine that used to release content centered around a different theme each issue.

On July 21, 2021, we decided to retire our platform. However, we will continue to maintain the site and encourage you to continue exploring our body of over 900 published blog articles.

Got a question? We might’ve already answered it. Please refer to our FAQ and Privacy Policy pages for more information.

At this time, we are no longer responding to any forms submitted through our site, direct emails, or social media messages.

We can’t thank you enough for all of your support over the last two and a half years. It has truly been an honor to write alongside all of you, and we look forward to collaborating again in the future, should the opportunity ever arise.